Gloves or Mittens: Which is Better For Snowmobiling? 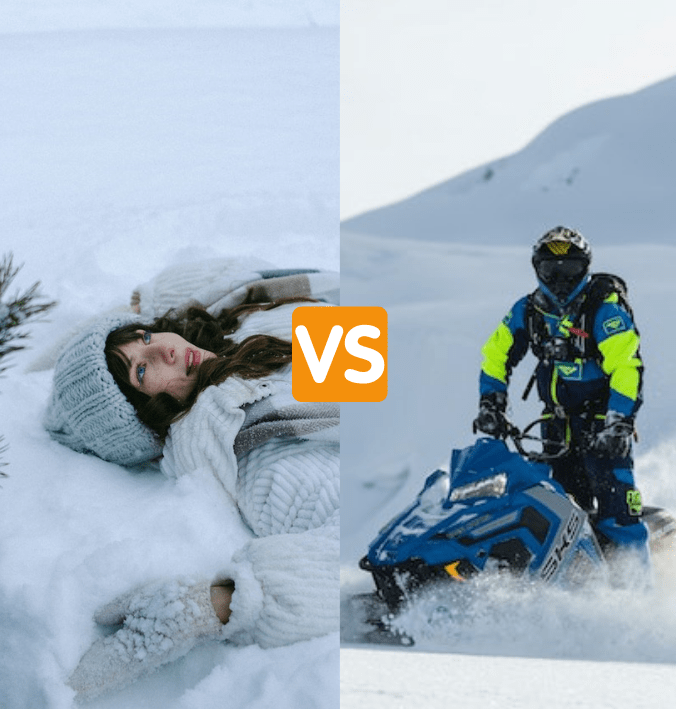 Till last year’s winter, I was using mittens when I rode on my sled. I thought the mittens were more of my style and they gave me comfort that gloves could not. But due to a mishap on the trails, I had to replace my mittens with snowmobile gloves. So I thought which one is better: gloves or mittens?

After using gloves for some days, I sing a totally different song now. What that is will be clear as in this article we discuss the pros and cons of using snowmobile gloves and mittens while riding your sleds.

What Are Snowmobile Gloves?

Gloves generally come with separate finger holes for all five fingers and thus feature awesome dexterity and grip of the handlebars.

What Are Snowmobile Mittens?

Well, snowmobile mittens are not that popular among snowmobile riders. Although they are made of materials that help keep your hands warm, dry, and safe from flying dust, snow, and debris.

Mittens generally do not have more than 1 or 2 divisions for your fingers. That means wearing mittens will require you to keep your fingers almost together sticking to each other.

Are Gloves Or Mittens A Better Option For Snowmobilers?

While both gloves and mittens come with their fair share of pros and cons, most snowmobile riders prefer wearing snowmobile gloves to snowmobile mittens.

Before looking at why gloves are preferred over mittens we will look at the features of mittens that might have made them triumph over gloves. But it did not. We will know what they are and how it did not matter much in the long run.

Mittens are usually designed in a way that it retains more heat. The reason is that it exposes less surface area.

Also, the way the mittens are designed provides a better surface area to line the insulation as well and there is more space as compared to gloves, in the mittens to provide a liner to it.

So you see snowmobile mittens can one-up the gloves very easily. But that does not happen because of a sole reason.

One of the basic reasons that gloves are preferred over mittens is that, due to their design, the former provides more dexterity than the latter. Wearing snowmobile gloves is easier to get a good grip on the handlebars because the fingers are free to work accordingly. Whereas in mittens it won’t be long before, the fingers might feel restricted due to the lack of movement in them.

So even if warmth is important while snowmobiling, safety while riding is a more concerning issue. Wearing gloves one is always free to do whatever they want be it holding something or even bringing the snowmobile under control with deft hand movements in the handlebars department.

You see the hands and fingers that help the snowmobile go forward safely.

Mittens are one thing that can interfere with your finger movement and thus might even become a cause of going off track and leading to risky situations.

Thus now my song is that snowmobile gloves are much better suited than snowmobile mittens. You can always switch one for the other, but it is not recommended due to its structural issues.

We hope this article was helpful enough in removing your confusion about the usage of snowmobile gloves and mittens.