Snowmobile Overheating: How to Fix This Instantly in 2022 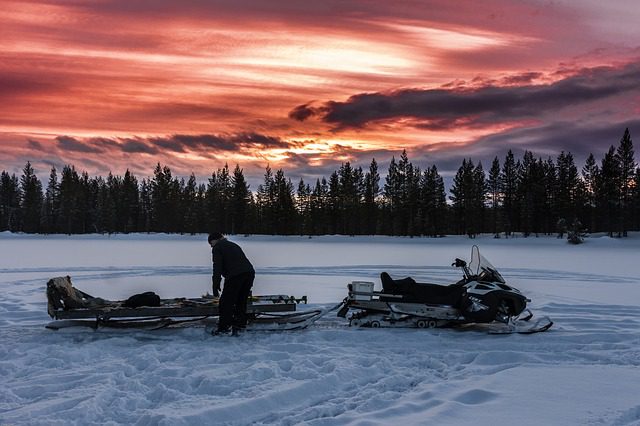 Winter is the holiday season, and many people enjoy the snow with their families. Some activities you can do are skiing and snowmobiling this season.

A variety of activities can be done using snowmobiles, like ice fishing. However, as these machines are similar to motorcycles, overheating is common and can raise concerns.

Let’s look at the common issues with overheating and how to deal with them.

Can You Ride a Snowmobile If It Overheats?

Snowmobile overheating is common, especially when it is idle and you are trying to warm up the engine.

This phenomenon is universal and does not cause any harm to the engine. After cooling down a little, the snowmobile engine’s pistons will return to the standard size and run smoothly.

Snowmobiles will continue to run if the engine is overheated a little during riding in ideal snow conditions.

Still, beyond certain temperature limits (set on an average at 1800 F), the computer will shut down the engine automatically to prevent any damage to the engine’s stator.

After cooling the engine down a bit, it can function normally and provide optimal performance, but it is advised not to let the engine frequently overheat to prevent potential damage.

Do Snowmobiles Overheat on Ice?

Overheating can occur during riding, even in ideal snow conditions, for several reasons—for instance, the use of cheap insulation material for the stator coils of the engine.

When the engine gets heated while riding at high speeds, the heat is retained, and the stator insulation might get damaged and cause the wires inside to short circuit causing the engine failure.

Also, some snowmobiles can overheat due to improper cooling of the engine.

When running at low speeds, the engine may not drive enough power for the coolant to circulate enough and reduce the heat.

So, running the engine at higher speeds/power is advised, causing more snow to be thrown on the vehicle’s heat exchangers, which helps in better cooling.

Is Overheating Dangerous for Your Snowmobile?

Snowmobile overheating is a common problem that can be caused for many reasons. So, preventing it by taking measures is advisable.

But if there is snowmobile overheating, it is possible to avoid any damage from happening to the engine.

If the snowmobile overheating is rampant during idling, there is no problem. The temperature will drop once the snowmobile starts throwing enough snow on the heat exchangers.

In the case of riding at high speeds, it is common for the engine to get overheated, and waiting 30 to 40 minutes to let the engine cool down to average temperature will prevent all kinds of damage.

But when left unattended, it can become hazardous for both the snowmobile and the rider.

What are the Problems Caused by Overheating?

Most snowmobiles have a light indicating the engine’s heating status to the rider.

In some models, the light flashes from time to time if the engine is hot and is on when the engine gets overheated.

The rider can cool the machine down by switching it off. But other models do not start flashing the warning light until the machine gets overheated and thus might be too late to protect the engine or other parts from getting damaged.

When the engine overheats, major damage-prone areas are the stator coils, engine pistons, or rings.

Overheating the pistons can cause engine seizures if not attended to after repeated overheating.

It is also possible for the piston heads to break with repeated cycles of overheating, causing fuel and coolant to leak.

Leakage of snowmobile coolant due to the blowing of the pipes is also possible if the coolant tubes are not checked from time to time, as frequent overheating can damage the walls of these pipes.

Causes of Overheating in Snowmobiles

Snowmobiles being similar to cars or bikes, the causes of overheating can mean many things.

So, it is essential to ensure all the necessary components are checked before looking into other reasons for the overheating.

It can be very trivial to check for correct quantities of engine oil. Still, the lack of necessary oil can cause the fuel mixture to overheat the engine and, in the process, cause the piston heads and rings to melt, finally leading to engine seizure.

Insufficient quantities of snowmobile coolant and antifreeze in the engine can cause damage to the engine in various ways.

So, it is necessary to check for the proper flow of coolant in the cooling pipes and look for leaks to prevent the engine from overheating.

Using the right fuel also plays a crucial part in keeping the engine integrity in check. Using fresh energy is thus essential as power left out from the previous season might be filled with impurities.

Leaving fuel in the tank for months together is also a problem as it can clog in the pipes and cause the engine to overheat.

When idling, overheating is not so problematic and can be caused due to a lack of snow to cool the heat exchangers.

If running at low speeds or on low snow, there are possibilities of overheating as the engine does not receive enough coolant to remove the heat.

When using the snowmobile for long trips at high speeds, genuine overheating of the engine is possible and is not problematic as long the engine is left to cool for some time.

If the heating problem persists, then looking into the engine components one by one for malfunctions or damage is necessary.

Few of them can be simple to solve, like looking at the fuel-air ratio that the engine receives or the compression of the piston head.

Other reasons like improper connections of the engine’s electrical components can also cause snowmobile overheating, especially of the engine components.

What To Do If Your Snowmobile Overheats?

As there are many reasons for the engine to overheat, fixing the problem can be difficult if the cause is not identified.

It is essential to maintain a minimum speed while riding as enough snow needs to be thrown on the heat exchanger to remove the heat from the coolant.

Also, more coolant circulation is vital for adequate cooling, so appropriate coolant for the machine is advised.

At high speeds, the cause of snowmobile overheating can be excessive power from the engine.

This problem can be solved easily by shutting off the engine and letting it cool down for a few minutes to prevent damage to the engine components.

If the problem persists, it is necessary to check for the basic components of the engine like the oil, fuel, and coolant used.

Ensure that all these are in check and do not cause overheating.

If all these are perfect and the engine is still overheating, take the snowmobile to a garage and check the components one by one for signs of damage or incorrect connections which might be the cause of the problem and rectify it immediately with the help of an engineer or mechanic for smooth performance.

Use an extra fan or radiator attached to the back of the snowmobile to help cool the engine for long rides. It is also good to use this method when the outside temperature is a bit higher.

When riding in thick snow, use can also use ice-scratchers under the tunnel to throw more snow toward the heat exchangers will aid in better cooling of the engine coolant and, in turn, the engine.

Also, please carry an emergency or an essential tool kit with you in your snowmobile whenever you go riding. You never know when it proves to be an indispensable asset for you in the middle of a breakdown.

As I mentioned above, snowmobile overheating is a common problem that can arise for many reasons discussed above.

So, it is better to keep the snowmobile well maintained and follow safety tips to prevent any overheating that occurs because of technical issues.

Taking a few remedial steps like installing a radiator or fan, using the appropriate fuel and coolants, and using scratchers can help keep the engine temperature in check and thus provide uninterrupted and smooth performance.

Have more questions about snowmobile overheating? Leave a comment below, and we will get back to you.